Photograph, black and white, head and shoulders portrait of a woman wearing a high-necked stripey blouse, nautical-esque puff-sleeved jacket, and hat with large bird wings and netting decorating it. Identified by a member of the Howard family as being Elizabeth (Lizzie) Howard, the first wife of Ebenezer Howard. c1900.

Elizabeth Ann Howard (nee Bills) was the wife of Garden City founder Ebenezer Howard and mother to their four children. She is noted as a driving force not only helping to make sure his dream became a reality, but in a practical sense as well, single-handedly securing a £50 gift from a wealthy supporter which assisted in getting his book, which outlined the Garden City Movement, published. She continued to raise funds, worked her way through London social gatherings and giving lectures. Sadly, Lizzie never lived in Letchworth, passing away in 1904, however she adored ‘the beautiful estate….’ 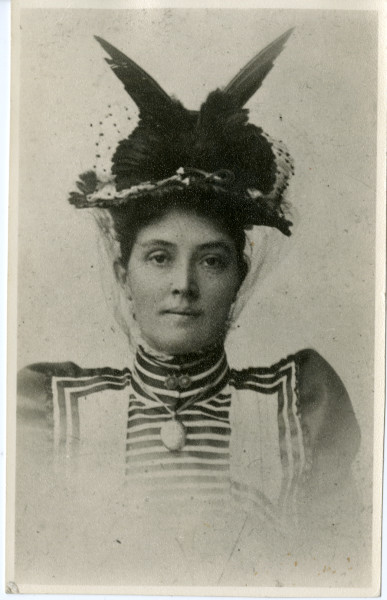